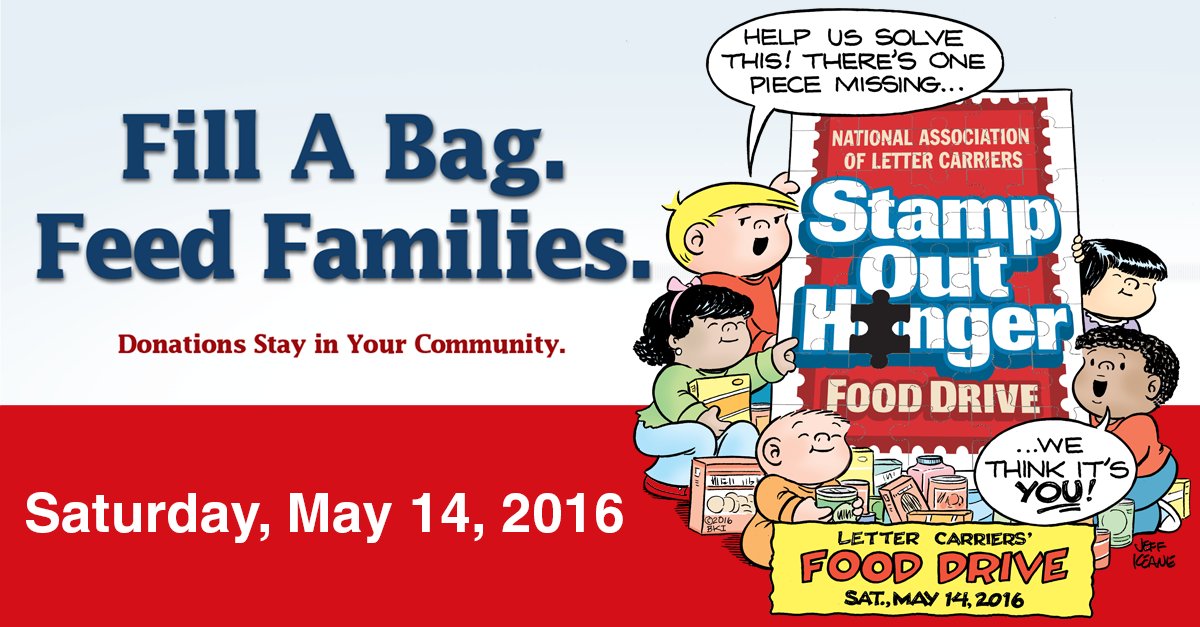 Tomorrow, May 14, is probably the easiest day all year to donate food to the hungry because the post office will literally come to your house and pick your donation up for you! Every year on the second Saturday in May, the USPS partners with several different food banks across the country to host the “Stamp Out Hunger” Food Drive. Just leave a box of non-perishable food items next to your mailbox tomorrow to help out a family in need!

Here is the full write up from the USPS:

Every second Saturday in May, letter carriers in more than 10,000 cities and towns across America collect the goodness and compassion of their postal customers, who participate in the NALC Stamp Out Hunger National Food Drive — the largest one-day food drive in the nation.

Led by letter carriers represented by the National Association of Letter Carriers (AFL-CIO), with help from rural letter carriers, other postal employees and other volunteers, the drive has delivered more than one billion pounds of food the past 24 years.

Carriers collect non-perishable food donations left by mailboxes and in post offices and deliver them to local community food banks, pantries and shelters. Nearly 1,500 NALC branches in all 50 states, the District of Columbia, Puerto Rico, Guam and the Virgin Islands are involved.

To donate, just place a box or can of non-perishable food next to your mailbox before your letter carrier delivers mail on the second Saturday in May. The carrier will do the rest. The food is sorted, and delivered to an area food bank or pantry, where it is available for needy families.

With 49 million people facing hunger every day in America, including nearly 16 million children, this drive is one way you can help those in your own city or town who need help.

“Resolved: That these United Colonies are, and of right ought to be, free and independent States, that they are absolved from all allegiance to the British Crown, and that all political connection between them and the State of Great Britain is, and ought to be, totally dissolved.” – Richard Henry Lee, Representative of Virginia, 1776

“Today is the day we celebrate our independence day!” – Bill Pullman, as President Thomas Whitmore, 1996

A brief history on the holiday from PBS.org, which you may have forgotten about since elementary school:

“Taxation without representation!” was the battle cry in America’s 13 Colonies, which were forced to pay taxes to England’s King George III despite having no representation in the British Parliament. As dissatisfaction grew, British troops were sent in to quell the early movement toward rebellion. Repeated attempts by the colonists to resolve the crisis without military conflict proved fruitless.

On June 11, 1776, the Colonies’ Second Continental Congress met in Philadelphia and formed a committee whose express purpose was drafting a document that would formally sever their ties with Great Britain. The committee included Thomas Jefferson, Benjamin Franklin, John Adams, Roger Sherman and Robert R. Livingston. Jefferson, who was considered the strongest and most eloquent writer, crafted the original draft document (as seen above). A total of 86 changes were made to his draft and the Continental Congress officially adopted the final version on July 4, 1776.

Enough with the internet now! Go outside and have a fun,  safe, and happy 4th of July! Don’t have anything else to do this weekend? One of my favorite movies of all time (The Sandlot) is playing tomorrow night at 8:30pm at Durham Central Park. The admission is free, food trucks will be on site, and you get to watch Benny and the Beast! I bet you can’t watch the trailer without wanting to go see this great movie in the park!

If you need any plans for the weekend, the Exchange Family Center is hosting PinWHEELS For Prevention Family Fun Day on Sunday, April 19, 2015. The event is at the Wheels Fun Park in Durham and is designed to help prevent abuse and neglect for children in the Triangle. For $12, you can get unlimited access to the skating rink, skateboard park, and jungle gym, as well as two go-kart rides, two batting tokens, and a round of mini golf. Families or groups can even get a $10 discount by purchasing 5 passes for $50. For an extra $3 per person, you can also participate in a 1 mile fun run. I feel like I could probably run a mile for free on my own, but the $3 goes to a good cause and you are still getting a great deal on the fun stuff to do at Wheels. For more information, check out their website. Have fun!